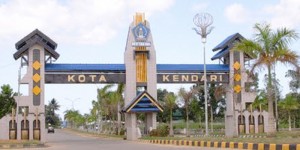 With height about 30 m above sea level, Kendari city is included into tropical area. The air temperature is around 19, 58°-32, 83°C with average temperature 26, 20°C. Kendari city has rainy season around November –March, and dry season around May-September. In April and October, Kendari has changing climate/ transition period. In this period, the wind flow is unpredictable and the rain fall is not prevalent.

Administratively, Kendari owns 64 mini subditsricts from 10 subdistricts, such as:

Historically, Kendari city has existed since 19th century with capital city Laiwoi kingdom. Kendari became a trading city by the opening of trading harbor in Kendari Bay by the Dutch government. The trading was developed because the trading skills of Bugis and Bajo tribe people who lived around Kendari Bay.

Kendari city then developed as trading and harbor city. It was a transit port of trading routes intra Indonesia. In Dutch colonization, it was a capital city of Kawedanan and Ander Afdeling Laiwoi. By the time, Kendari keeps developing and becomes the capital city of South East Sulawesi.

With 289,468 population (based on data in 2010), the majority people of Kendari are Muslim. Kendari is dwelled by Tolaki, Muna, Buton, and Bugis tribe. While the native Kendari people are from Tolaki tribe.

The majority culture owned by Kendari comes from Tolaki tribe’s culture. In daily life, Kendari people use concept ‘KALO SARA’ from Tolaki’s culture which means noble values of Tolaki culture which implemented in every aspect of life. For example, in social interaction, custom law, religion, ethics, and art. For Kendari people. KALO SARA is a balancing agent in their life, either its horizontal interaction between humans, nature or God.

Beside in social interaction, the culture of Kendari city Sulawesi island can be seen from its culture product, such as wedding ceremony, traditional costume, dancing, and music. Kendari has several traditional dances such as Lulo, Mondotambe, Mekindohosi, and Moana dance. Those dance usually escorted by traditional music and musical instrument. The music art usually uses tools from bamboo and gong. But recently, those tools are replaced by keyboard.

Kendari people are also known as a skilful silver craftsman. They have their own technique in making the silver handicrafts. Besides, they also make wooden handicrafts known as Gembol handicraft. This handicraft uses material from various woods like teak and sandalwood.

Kendari is a hilly and coastal area. The tropical climate makes Kendari city has shady and dense nature. If you visit South East Sulawesi, spare your time to see several tour places in Kendari city.

Below tour places in Kendari city: