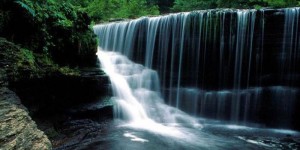 In South Sulawesi, there’s a very popular tour object that is Bantimurung waterfall. This waterfall is about 15 m high, has clear and cool water, and also has really strong stream too. Below the waterfall, there’s limestone base which is used as bathing place. This limestone is solid hard and has been covered by mineral layers for hundreds of years.

In the left side of the waterfall, there are 2 caves, named Mimpi cave and Batu cave. To get into the cave, there’s 10 m high stairway made from concrete that you can use.

Beside the waterfall’s charm, this tour object also becomes a ‘home’ for various rare species of butterfly that made it called as ‘Kingdom of Butterfly’ at the time of Dutch colonization. Even Alfred Russell Wallace from England, lived for a year only to examine about 150 species of those rare butterflies.

Up till now, tourist who visits this waterfall will able to see the colorful butterfly attraction, which fly amongst flowers and bushes in Batu Bantimurung mount. If you’d like to see more clearly on these rare species of butterfly, you can see it in a museum which located in the waterfall complex.

From Hasanudin airport, the waterfall is less than 20 km and 50 km from Makassar city. If you’re from airport, you can take public transportation (pete-pete), or mikrolet, which only need 30 minutes.

There are bungalows, inn and hotel for those who want to stay overnight in Bantimurung waterfall, such as Kanaka Giana Hotel and Darma Nusantara 2 Hotel.There are also stores and sellers which sell key chain in shape of butterfly which can be used as souvenirs.