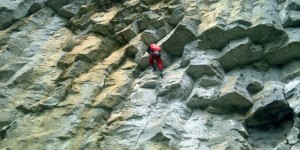 There are many tourism places that you can visit in Sulawesi Island. Some of them offer outdoor activities sport, or an extreme sport like rafting. But this destination is really extreme.

“Batu Dinding Kilo Tiga” is a natural cliff which shaped so unique. Unlike any other natural cliff, “Batu Dinding” (that’s what local people call it), has shape like lines of blocks but layered reversely. One upper block is on the block below it, so the higher it is, the more bulging the cliff’s surface will be. The gorgeous of “Batu Dinding” will arise if it seen from distance. But you will feel more awesome if you see it nearby, and see how those blocks can unite so perfectly.

For you who like cliff climbing, “Batu Dinding” will give you sensation which will urge on your adrenaline. Your climbing experience will expand, and also will be tested here. The reversely blocks layers will make you spend more brain and power. Besides, there are routes that have been made in “Batu Dinding”. Some of them are also unique, because it has name and its own characteristic.

Up till now, only few climbers that are able to pass “Malaria” And Lamentation Route, because those are the two toughest routes in and all Indonesia.

But for you who don’t like cliff climbing extreme sport, don’t worry. Beside the magnificent “Batu Dinding”, the surrounding view of it is really shady and cool. Not far from “Batu Dinding”, you can see the clarity and the freshness of “Ranoyapo” river. This river is also often to use for rafting sport.

For you who want to visit “Batu Dinding”, won’t be charged for any ticket because it still in development plan. It’s suggested for you to give some donation, because the cleanliness and the maintenance of the cliff are done by local people.

Accommodation facility and restaurants only available is nearest city to “Batu Dinding”, which is Amurang and Manado. Some of hotels near “Batu Dinding Kilo Tiga” that recommended are Minahasa Lagoon Hotel and Manguni Terrace Resort. If you interested in climbing “batu dinding”, it’s suggested for you to bring your own equipments. For safety and comfortability of climbing, it’s recommended that you contact “Cliff Hanger Amurang”, or nature lover communication forum (FKPA) of North Sulawesi.