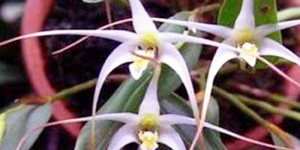 Do you (Indonesian citizen) still remember with this stamp? For you who don’t know it, the stamp was published in around 1997 and became one of stamp collections in Indonesia. The Orchid serial print that was produced by Indonesian Post office philately was trying to eternalize one of flora that recently is very hard to find, either the stamp itself, or the real plant existed in the stamp.

The existence of Serat orchid at that time was quite useful for local people. Beside it was easy to be found in forests, local people use the fiber in its tuber as material to make handicraft that can be used in daily life, such as multipurpose basket and bag. Even, according to ancient story, Serat orchid or by local people was called Sorume orchid had high prestige and can be possessed only for kings.

Till sometime ago, the orchid is still used by local people, beside for daily tool, the handicraft from Sorume orchid fiber has high esthetic value. The imaginary tuber produces golden and shiny weaving with soft texture. Hence, the handicraft has high sell value. Beside handicraft from its fiber, Serat orchid is also salable in its original shape, as decorative plant. The petal shape and its unique root knitting make the orchid worth to be collected amongst other orchids.

But because of massive exploitation, and the low awareness of local people, has made the orchid drastically lessen and hard to find. Serat orchid is going to be extinct. Beside those factors, Serat orchid is a short-lived orchid and according to some experts, the orchid cannot live outside its real habitat, at least for climate and nature condition, especially in recent time.

The massive logging, the forest opening, and the increase of people population has made Sulawesi’s nature condition is no longer beautiful. Not mentioning the nature mineral mining like nickel, copper, gold and iron which force the green forest into hot and arid. The real habitat for some Sulawesi’s flora and fauna change drastically. The result is the endemic flora and fauna in the area is threatened to be extinct including the Serat orchid. Nowadays, the orchid can only be enjoyed from its image in the stamp above.

In its real habitat Diplocaulobium utile is included as epiphyte who sticks to the main plant, usually to a tree rod especially old or decayed tree. Serat orchid can grow and flourish in height about 150 meters above sea level. The spreading area starts from Sulawesi Indonesia to the east, till Papua.

But there’s still a little hope in the middle of a press. Based on research of experts who analyze its morphology and anatomy, Serat orchid might still be found in Silikeri Protected Forest, Mekongga mountain range which located in Ulu Mowewe village, South East Sulawesi.

Will the botany researcher and orchid lovers are able to knit this orchid’s future?