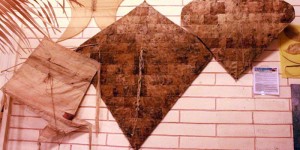 Do you know that till 1997, China is the inventor of world’s first kite? This china’s kite predictably existed in China since 2800 years ago, and made from silk and gold bamboo as its frame.

But in 1997, a German man, as well as a kite lover and kite expert, declared that Kaghati is the world’s first kite.

It begins from international kite festival Berck sur Mer which was held in France in 1997, Wolfgang Bieck is interested to kite from Indonesia. This kite is only made from leave, and in the festival, this kite has defeated kites from Germany and reached first prize. Due to his attractiveness of Kaghati, Wofgang finally visited Muna Island, in South East Sulawesi to learn more about this traditional kite.

In this opportunity, Wofgang was invited by a kite lover from Muna Island to see a painting inside Sugi Patani cave, located in Liangkobori village, Muna. In the cave’s wall there’s a drawing which described a man was flying a kite. From this point, Wofgang research is started. Through some steps of research, it’s known that the drawing in the cave’s wall was made since Epi-paleolithic era (Mesolithic period), or about 9,000-9,500 BC.

From this result of research, Wolfgang then declared that the Kaghati from Muna, South East Sulawesi is the first kite ever been flown by human. The travel of research was then written by Wolfgang and published by a magazine in Germany with title ‘The First Kitman’.

Unfortunately, there is no complete history record from Kaghati that can be found, so it can be stated as the world’s first kite.

Kaghati is a traditional kite of Muna island, South Sulawesi people. Kaghati is included as a unique kite because the main material is dry leaves combined with bamboo skin.

The natural materials used to make Kaghati are relatively easy to get around Muna Island. those are kolope leave, or forest tuber as the main sail /screen, bamboo skin as the frame, twisted forest pineapple fiber as rope (modern kite are using string ). The size of the kite us varying, depends on the maker’s wish. Averagely, Kaghati sized almost as a grown up man.

Though it’s made from natural material, Kaghati is a sturdy kite. Kaghati is able to fly high and last in the air for days. The sail which made from kolope leaves is arranged such a way so it became strong and water proof. Of course, this kind of treatment is done naturally as well. You can watch this traditional kite making in villages of Muna Island, South East Sulawesi, such as in Mabolu village, at Lohia sub district.

Besides, in the both sides of Kaghati there’s a part called kamumu. This part resembles a ribbon which made from coconut leaves or bark of waru tree. This kamumu will create a sound when it flies in the air, and it’s made according to the owner taste. so, at evening, the owner of Kaghati can recognize his Kaghati from its sound.

Up till now, Kaghati kite can be found in around Muna Island. Here, you can watch the unique habits of local people, which is flying Kaghati for 7 days non-stop. In ancient time, the ancestor of Muna people flew kite as a spiritual method. The flying Kaghati is hoped as the guide to God which exist in the sky.  In the last day after 7 days of lying, the rope of Kaghati is cut and let to fly freely by wind. It is hoped, that this kite will able to guide the owner’s soul after the owner is die, to place where God is belong.

But since Islam penetrated into Sulawesi Island, this culture has changed into entertainment method. Nowadays, Kaghati kite is flown after the grand harvest. For you who want to see this unique tradition, it’s suggested for you to come around June-September. In this period of time is considered to be the perfect time to fly Kaghati, because the east wind blows strongly passing this area. At these months, most people of Muna usually fly Kaghati, so you can see Kaghati flying all over the place.

Kaghati has been flown in many national and international kite festivals. For kite lover in Europe, Kaghati becomes a distinct interest due to its uniqueness and toughness in the sky.