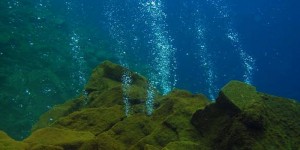 Sulawesi area is included in the earth plate’s meeting area. This geographical condition had caused Sulawesi to have marvelous biological richness, including the biological richness of Sulawesi Sea. In Sulawesi watery area, you will find many remarkable under sea scenery. Various sea biota and cluster of coral reef will serve beauty and experience you will never forget.

The amazing view can be found usually in the shallow water. Sulawesi is indeed has many shallow water area, because it’s also an archipelago.

This kind of scenery can also be found in sea volcano complex in North Sulawesi Sea. Around Sangihe archipelago, you can find several under sea volcano mountains. Of course, with the volcano activity, the under sea scenery will also amaze you.

Watery area in North Sulawesi keeps some uniqueness. Land around this area is an archipelago. Precisely in this area, there is a meeting of two gigantic earth’s plate which are Australia and Eurasia plate. Hence, in this water area can be found several volcano mountains under the sea.

Till 2010, have been recorded 5 volcano mountains in Indonesia which located under the sea. Those mountains are Hobal mountain (in Lembata island, NTT), Emperor of China and Niuwewerker mount (in Banda sea), Mahangetang and Submarin mount (in North Sulawesi sea).

In 2010, was found another volcano mountain under the sea of North Sulawesi. This mountain was found unintentionally by an oceanography research. After this, there was a sequel research about the existence and ecosystem around the mountain. Since it is located in Kawio Island (Sangihe archipelago), the mountain then named West Kawio Mountain.

West Kawio Mountain located inside Sangihe Sea, where the depth can reach to 5100 m from sea level. West Kawio Mountain itself has height around 3200 m, which the top of it is located approximately 1900 m below the sea. Some sources even mentioned that this mount is world’s highest volcano mountain.

From research result, there‘s rich ecosystem biota around West Kawio mountain and there are many solid and healthy coral reefs with various colors. So does with sea creatures, such as fish, shrimp, lobster, squid, and many others. Those creatures grow healthily and have many colors. The unique thing is the ecosystem is able to live and grow well in the sea depth with temperature till 200 °Celsius.

In height of 2000 m of the mountain, there are some kinds of smoke chimneys which expel heat (hydrothermal) from inside the mountain. Around these hot chimneys there’s also a similar ecosystem. Unfortunately, to enjoy it you have to dive using high technology submarine. But do not worry, you still can enjoy another amazing scenery of the ecosystem around Mahangetang mount.

Mahangetang Mountain by local people also called as Banua Wuhu Mountain. This mount is an active volcano mount. The top of it is in 6-8 m below sea level. In this mountain top you will able to see under sea ecosystem which is really amazing.

The location of Banua Wuhu Mountain is in Mahangetang Island water area, one of islands in Sangihe archipelago, North Sulawesi. The mountain top located around 300 m southwest side of Mahangetang island, precisely at 3° 08‘ NL and 125° 26′ EL. Banua Wuhu mountain can be reached about 1 hour by sea from Tahuna city, Sangihe district or about 5 hours by sea from Manado city.

At 6 m depth, you will find coral reef which expel air bubble. These bubbles are the gas which comes out from inside the mountain of Banua Wuhu mountain. In this depth, the water temperature will be a bit warm around 37°-38° Celsius. Though the coral reefs are so interesting, it’s not suggested for you to touch it, because the bubble is decrease drastically when it blend with sea water but extremely hot when it still inside the reef’s cavity. It’s suggested for you to be careful so your hand won’t get burnt.

Diving deeper, in the depth of 10-20 m, you will meet with a marvelous sea ecosystem. Clusters of coral reef are lined densely and look healthy with the various kinds of fishes and other sea creatures playing amongst the reef. This ecosystem is closely similar to ecosystem around West Kawio Mountain, where the coral reef and sea biota are so interesting with their various colors. It’s suggested for you to use complete diving equipment because the location is quite deep.

This ecosystem has been famous to foreign countries as one of world’s most beautiful under sea volcano after Caribbean archipelago.