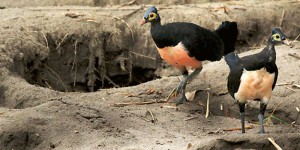 Here’s another of Indonesia’s fauna richness. For a glance, it looks like a chicken, and indeed this animal is a kind of poultry. And why does it amazing? Beside the ‘black helmet’ which doesn’t owned by other poultries, this bird is the only species of Macrocephalon genus and can only be found in Sulawesi island, Indonesia. Its name is Macrocephalon maleo, which usually called as Maleo bird or Maleo Senkawor. Maleo bird is the real ‘print’ or endemic animal of Sulawesi.

Maleo is included a poultry with medium body, about 55 cm length, big size in its body and getting smaller in the head. The dominant color is black and white in its chest. The big body and small head is functioned when Maleo rest, and also when it hide in the ground from predator. Its feet is nailed and filmy, but doesn’t meant to swim but to dig the ground. But the fastest and easiest character to recognize it is the shiny black head shell.

Maleo spend its life on the ground, because it consumes insects, ants, and seeds. But it also moves from tree to tree to avoid predator. Maleo is not live in herd, and for its whole life is spent with its one and only mate.

The real habitat of Maleo bird is around the beach and area which has enough earth thermal. Because to breed, Maleo doesn’t hatch the egg but bury it in the sand/ ground which is warm enough. Usually, in the spot with pretty warm temperature, Maleo dig a hole in 30-50 cm deep, put its egg in it, and cover it with ground around 10-15 cm above the eggs. The hole is not completely covered so when the egg is break out from its shell, the small Maleo can get out of the ground. The small Maleo will have to move from the ground itself and it can straightly fly to look for its food without any help of its mother.

So, from where does the Maleo mother detect places with enough heat? The experts estimated that to look for the incubation place, Maleo is using heat sensor which planted in its black helmet. What a sophisticated helmet!

Beside for egg incubation, this unique habit is aimed to avoid predator such as biawak, or the local call it soa–soa, and boar.

Another amazing thing is the egg is quite large, approximately 240-270 grams and 11 cm in length, or 4 -5x bigger than average chicken egg.

But due to the earth changes recently, Maleo is included to be endangered animal and rare. This thing is also caused by the hunting of man to consume its meat and egg, and also to open a new farming land. There’s local myth that when a house is built, then under the house is obligatory to bury one egg of Maleo. This thing is done with the hope that the house is long lasting and stand strongly.

That is why there are only few of Maleo bird that can be found in its real habitat. According to research, Maleo is come from Australia but in fact, it can only be found in Sulawesi island.

Hence, for you who travelling to Sulawesi and wish to see the rare poultry, you can meet them in Central Sulawesi, in the breeding which built for this unique bird perpetuation, such as in Alam Saluki Nature Preserve in Donggala district, or in Lore Lindu National Park and in Nani Wartabone National Botanical Park.

For the same purpose, please don’t take the Maleo’s egg.