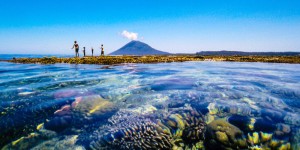 You must be familiar with Bunaken National Sea Park. Its world’s one of the most beautiful sea, pride of Manado city.

Manado city is located in administration area of north Sulawesi, and also as the capital city of the province. With Minahasa tribe as the biggest tribe, Manado city has a quite unique slogan which is Si Tou Timou Tumou Tou. It’s a life slogan for Minahasa people which means ‘ human humanize another’.

Majority land in Manado city is a line of mountains and hills. While the low land located around the beach. The climate of this city is relatively same to another city in Sulawesi, which is tropical. Rainy season is on April-September, dry season on November-march. The average temperature is 24°-27° C.

Manado city is also the 2nd biggest city after Makassar. The majority land in Manado is mountains and hills in the center of it. The height reach to 610 above sea level (Tumpa mount), but in the city area average height is 25o m above sea level. The low land is mostly in shape of beach in the edge. From hills and mountains above, few rivers are also crossing Manado city, such as Tikala, Tondano, Malalayang, and other rivers more, which end at Manado bay.

Majority area of Manado is also limited by beach with extended beach shore approx 18 km length. While in the northwest, Manado also covers watery area with 3 main islands. One of them is famous for its splendid, Bunaken Island.  Watery area in beach shore of Manado Bay has depth around 2-5 m, and getting deeper to 2000 m , in the offshore (convergent limit of beach shore base with continent’s plate).

The word ‘manado ‘ is taken from Minahasa language : ‘mana dou’ or ‘mana rou’. In indonesian language means ‘ dijauh / at far. The word Manado is taken from an island next to Bunaken Island, which also named Manado. Around 16th century, the name ‘manado’ then is used to name the city in the mainland, which previously called ‘wenang’ or ‘pogidon’. After since, Manado city started to be visited by foreign people.  According to history, these people were coming due to the rich mines which are famous amongst European people.

With population around 410.480 people (data from 2010), Minahasa people is the biggest tribe in Manado, because Manado itself is in Minahasa territory. But the native people of Manado came from Tombulu sub tribe. The people of Manado also came from other tribes, such as Bantik, Gorontalo, Sangir Talud, Mongondoow, and others. While the newcomer tribes which now become part of manado people, mostly come from Arab, and China. Another newcomer tribe is coming from Java, Batak, Makasar, and other areas.

Most people of Manado city are Christian, while the rest of them are Islam, Catholic, Buddha, and Khonghucu.

Besides kolintang, other manado culture products are Bia instrument, bamboo wind instrument, wale or panggung house (house on stilts), and also Kabasaran and Maengket dance, which a reflection of Manado culture.

In culture, Manado people still apply Mapalus concept, which is a socialization concept that has been done since ancient time. In Mapalus concept, Minahasa people are hoped to help each other, and to cooperate each other to reach common interest. Every person has different ability and limitations, so with Mapulus, it is hoped that each person can respect and help each other.

Watery area of Manado city covers some islands. There are also main islands in Manado watery area, such as Bunaken, Siladen, and Mantehage Island. Maritime tour is Manado’s mainstay, because those islands, have remarkable view. In addition, you will be amazed by the beauty and the richness of it’s under sea scenery, such as in Bunaken Island with its Bunaken National Sea Park.

While in Manado’s mainland, it also has its own marvels. You can visit some places as an option of tour in Manado with difference experience. Those are :