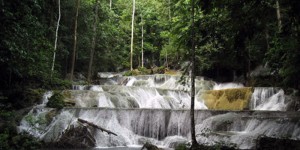 The air in Moramo waterfall is very cool, since its in the area of Tanjung Peropa natural preserve forest, which is a protected forest area in south east Sulawesi. Hence, many local and foreign tourists come to visit this waterfall to enjoy the natural beauty and the cool, clean air.

This tour object also has natural resource in form of marble stone. According to research, the marble content in this area reaches to 860 billion / m3 and become the world’s biggest marble stone deposit.

The waterfall which has 7 main levels and 60 small levels has height around 100 m and becomes the good habitat for birds, butterfly and other animals. The 60 small levels are in the shape of small pool, but only one of them can be used to swim. This pool is in the 2nd level from the seven main levels in moramo waterfall. The combination of protected forest, waterfall object, and various animal habitats has become the main attraction of moramo waterfall.

Besides those things above, the beautifully arranged stones into levels are also another attraction of this waterfall. Tourist can take pictures in those levels, and nothing to worry, because those stones are not slippery even it’s become the water flowing.

If you’re from Walter Monginsidi airport, you can take public transport to go to Tanjung Peropa Natural Preserve. After you reach it, you can continue the trip by foot for more or less 2km.

There’s bathroom and toilet you can use to change your clothes after you’re swimming. it also available resting place, complete with wide parking lot. There are several hotels near Moramo Waterfall.