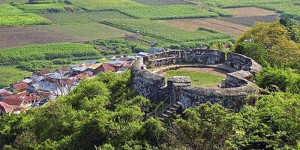 Otanaha fort was built as defense fort by king ilato in 1522 ad, with initiative from portuguese captains which docked in gorontalo harbor. The fort is made from sand, limestone and maleo’s egg (maleo: a big, endemic bird of Sulawesi island, Indonesia). This fort is very strong though it’s made from maleo’s egg as the cement.

There’s a story about Otanaha fort. Long ago, king Ilato had 3 children, two daughters named Ndoba, and Tiliaya, and a son named Naha. At his teenage age, Naha left his homeland to other region while his sisters stayed in the kingdom. In 1585, Naha planned to go back to Gorontalo and to marry Ohihiya. Shortly, they have 2 children, Paha and Limonu. One day, there’s a war with Hemuto, a transmigran leader, Naha and Paha died in the battle, and Limonu couldn’t accept it, and do revenge.

To remember their struggle in the battle with Hemuto, then the fort was named Ulupahu, Otahiya, and Otanaha fort. In its development, it’s more popular as Otanaha fort.

Otanaha fort was built on a hill. Tourists who visit this fort have to pass some rungs and 4 stop points. The weird is, each rung in every stop point is not the same. From the beginning of the trip, the rungs is 52, from 1st stop points to the 2nd is 83, from the 2nd stop point to the 3rd is 53 rungs, and from the 3rd to the 4th stop point, there are 89 rungs. And to get into the fort, there are 71 rungs.

Though the trip to reach Otanaha fort is exhausting, but it will soon disappear after you see the magnificent view around the fort. From this place, tourist can also see Limboto Lake from upper part of the fort.

From Gorontalo city centre, Otanaha fort is located about 8 km, and tourist can take motor public transport such as pedicab /bentor, for more or less 20 minutes.