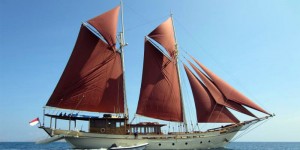 Pinisi ship is a special ship. This ship is made by skillful hands without any modern tool. The whole part of the ship is made from wood and combined together without using nails. Nevertheless, the Pinisi ship has proved its specialty by conquering oceans and travelling countries in the world. Though it’s made from wood, this ship is able to survive from wave attack and storm. Pinisi ship is the only big wooden ship from old history that still produced up till now.

The Land of the Ship Maker

Do you still remember about ship movies in television? Like pirate, old adventure or Chinese colossal movies. You can see big ship made from wooden, don’t you?

In old days, many cultures produced big wooden ship such as Europe, Japan, China and America. In those days, those wooden ships are used for many purposes through sea route, for example, for expedition (where airplane hasn’t invented yet), for trading, and even to war. Seen from measurement dimension, Pinisi ship is relatively small compared to big wooden ship from cultures stated above. That because the function of Pinisi ship is as carrier ship.

Pinisi ship is the only big wooden ship that is still produced until now. The making area is in our beloved land Indonesia, precisely in Bulukumba district, South Sulawesi. It located about 150 km by land from Makassar, heading to south east coast of South Sulawesi. In this coast, you still can find skillful hands of Pinisi ship maker. The skill of making the ship is owned by tribes who live in the coastal area which is Bugis Makassar tribe. This skill is inherited for hundreds of years from their ancient ancestor up till now.

Pinisi ship is handmade ship, a kind of ship that uses sail and wind blow as the mover (at that time machine as the mover hasn’t invented yet). In the middle of the ship, there are 2 poles with height about 35 m, with 7 sails Sekunar type which fragmented from front to rear.

This ship has length around 15-40 meters, depends on the order. It is made using simple tools and done by skillful hands of 10 people (usually the people are called Sawi) which led by a person which usually called as Punggawa (the chief of the workers). All parts of the ship are made from wood, and the main material is from teak or ironwood. The assembling of the ship is not using any nail / iron nail, but the boards are united and nailed using wood waste from the body ship making. The ship making process is depends on the ship measurement, which usually takes time of 1-2 years. The bigger the ship, the longer the production process will be.

Of course, as culture product, the production process is also accompanied with local traditional ceremony. From wood choosing, the logging, the start production process till the launching of the ship to the ocean cannot be separated from traditional ceremony. This sequence of ceremonies is aimed so the ship can be functioned well till the wood decayed and safe when it sails in free oceans.

Bugis Makasar people are known as maritime experts since hundreds of years. They sailed to many places on earth using only nature navigation, such as reading the stars, reading the cloud movement and etc.

Beside, they also make sea transportation means themselves. The most unique thing is, in the making of Pinisi ship, a Punggawa lead the making process without any note. Notes like measurement, ship design and its details are not recorded into written form or other form of record. All knowledge that owned by a Punggawa is in his head and inherited for hundreds of years, verbally. That is why, Bulukumba, Sulawesi island also called as the Home of the Ship Maker Expert.