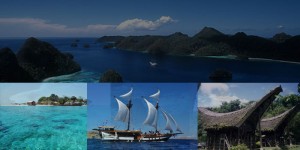 Sulawesi Island is one of the biggest islands in Indonesia after Kalimantan, Papua, and Sumatera. Sulawesi’s land broad is around 174,600 square km, which has made it as the 11th biggest island in the world.

Sulawesi Island is located in the north side Indonesia. The location is between Kalimantan in the west side, Maluku in the east side, Philippine in the north side, and Indian Ocean in the south side. Sulawesi is so near to the equator line, precisely in 2⁰ 08’ SL and 120⁰ 17’ EL.

Viewed from geographical situation, Sulawesi Island is a combination of big land and cluster of islands. There are many islands spread out around the big island. The land, is not exposed and united, but it’s cracked so it shaped into letter ‘K’. Hence, Sulawesi has many bays. Three main bays in Sulawesi are the Tomini Bay, (north), Tolo Bay (east), and Bone Bay (south).  Thus, with the position that near the equator line, the forests in Sulawesi is also included into tropical rain forest.

Hence, so many things can be enjoyed in Sulawesi Island. To travelling, to adding more knowledge, or just simply to release exhaustion, Sulawesi island is the perfect place to visit.

The biggest island in Sulawesi is the Sulawesi Island itself, which shaped letter K.  Beside its unique geographical form, Sulawesi’s land also has many fractures around the land’s edge.  So, there will be many beautiful beaches that you can find in this island.

The beaches in Sulawesi are commonly face the shallow sea, that makes the view created, will make you reluctant to go anywhere else. The example is Likupang beach. The white sand is rugged next to the clear water of the sea. The sea is green bluish and for it so clear, it will makes you able to see the coral reef in its sea floor. The sea is calm that you don’t need to feel afraid of swimming and enjoying the sea biological richness. Various kinds and shape of fish you can find in the shallow sea of Sulawesi. As info, Sulawesi also known of having sea biological potency, such as Bunaken National Sea Park.

So does with the islands around Sulawesi. The short distance shaped a cluster that will satisfy your adventure. Most of the beaches has white sandy beach, and of course shallow sea amongst those islands, for example Samalona Island. In Sulawesi, people also using boat for their daily transportation mean. Because the form of the land that consist of many islands, so to fill the daily needs, the people of Sulawesi is often move from one island to another. The boat is usually a small wooden boat, like the one usually used by the fisherman. But it will be a distinct sensation if you go sightseeing using the boat. So, for you who love water sport, Sulawesi will spoil your hobby.

One of potencies in Sulawesi is the forest richness. Not only about the dense of the trees and plants, but in the forest, you can find various kind of plant and animal that included to be rare, such as anoa, Bear kus-kus, Serat orchid, Tarsius monkey, Maleo bird and many others. The flora and fauna is now protected by either the government or the world conservation board, because the amount of them in the real habitat is so few. Beside rare, the flora and fauna is also a Sulawesi Endemic means that the real ‘birth’ is in Sulawesi and cannot be found in any place except in Sulawesi only.

Of course, when you’re in Sulawesi, you don’t need to travel and wander the forest yourself in order to see the flora fauna. Some forest areas in Sulawesi is in protection or conservation, such as Nani Wartabone National Botani Park, Lore Lindu National Park, Aopa Watumohai Swamp National Park, and many others. In those forest areas, there’s usually an officer on duty. You can ask all information about those plants and animals. And if you want to see them directly, you can travel the forest guided by the officer.

Another thing, you can find magnificent waterfall and river flow in the forest like Saluopa waterfall and Moramo waterfall. The tropical rain forest is forest which can be find in the area with has 2 seasons only; dry and rainy. Hence, many water supply kept by the tropical rain forest. So, it doesn’t surprised if there are still many clear and cool water flows that can be found in forest of Sulawesi.

Beside the common tour places such as beach, sea and islands, the cave tour sounds a bit strange for you. But this kind of tour is not less attractive than the other tour places.

The geographical situation of Sulawesi is quite unique. Many land fractures along the land’s edge. So, it’s not surprising if there are many caves in this island. Some of the caves have a pond and underground water flow which located inside the cave, such as La Kasa cave. Some other caves serve a local history such as Liana Latoondu cave, and also story about local culture where the evidence or the culture product can be seen in that cave. For sure, the beauty of the view you will see, is not the one that can be found in the land surface but a beautiful cluster of stalactite and stalagmite inside the cave. The rock structure of lands in Sulawesi consists of limestone. So, the majority cave in Sulawesi has cluster of stalactite and stalagmite.

Advice for you who interested in it, don’t forget to bring flashlight, and spares of battery.

In Sulawesi there are two major cultures that still exist till present day. Those are Bugis and Toraja. In Indonesia, those cultures are included to be unique and special, which become the characteristic of Sulawesi.

Bugis tribe is the origin people of South Sulawesi. Bugis tribe is Malay Deutero tribe, in other word, Young Malay. The ancestor came from Yunan (ancient Asia) through the trade strip. Many of Bugis’ culture product that you can enjoy and learn, such as dancing, traditional cloth, traditional house, to wedding ceremony. Nowadays, you can find this culture in South Sulawesi, such as in Makassar city. Up till now, the culture still well preserved in the daily life of the people. You can find the culture easily in Makassar city.

The most famous Bugis’ culture of product is the Pinisi ship. Pinisi ship is an ancient transportation mode, usually used to carry things. This ship is included into sailing vessel which uses wind as the mover. Pinisi ship is already known since 14th century. Even now, the world has admitted the existence of Pinisi ship. These days, Pinisi ship is use for luxurious cruise and expedition vessel. But still many of Sulawesi people use it as daily transportation means. You can see the ship and the making process in Bulukumba sub district, South Sulawesi.

Toraja culture still can be found up till now. You can enjoy the unique culture in Tana Toraja, South Sulawesi.