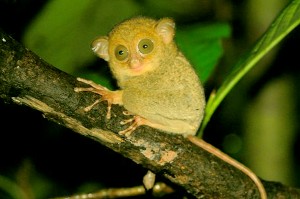 Tarsius siau or Tarsius Tumpara is one of species from genus Tarsius, which can only be found in Siau Island, north Sulawesi. Tarsius Tumpara is an endemic primate of Sulawesi which is hard to find due to the threat of extinction. At present day, Tarsius Tumpara is included in the list of 25 endangered animals which protected by UN and world conservation board.

Tarsiidae family has been existed since 45 million years ago. While genus Tarsius is known since 1897 and spread world widely with various different species. From Africa, America, to Asia, according to the nature condition of the region. But since 20th century, Tarsier is the only member of Tarsiidae which survive in Asia mainland, especially in South East Asia.

In Indonesia, Tarsiidae family is spread in some lands, especially in Wallacea area, such as South Sumatra, Kalimantan, and Sulawesi. The genus Tarsius itself only spread in Sulawesi island (classification according to Groves and Shekelle, 2010), including Tarsius Tumpara, while other species are spread in other islands and Philippine.

Tarsius Tumpara was recorded to be found first time in 2002 through the research of Zoology Museum Bogor. This animal is a new type that is found from genus Tarsius.  But since its founding, International Union for Conservation of Nature (IUCN) placed Tarsius Tumpara in the red list with Critically Endangered status. Red List is flora and fauna list which is endangered and protected around the world. There are 3 categories in red list and Critically Endangered is the most concerned.

Tarsius Tumpara don’t even found in other island except in Siau Island and other small islands around it. In 2009, has been recorded that Tarsius Tumpara population is only 1300 and keep decreasing drastically. This thing is happened because the real habitat has been change much. While if it put in other habitat / breeding, they can’t last long.

Siau Island is one of islands in cluster of Sangihe Island which located in the north side of Sulawesi Island’s tip. Siau Island is included in north Sulawesi province, around 150 km northeast side of Manado city. This island is the only real habitat of Tarsius Tumpara.

In free nature, Tarsius Tumpara is a climber animal. Its life mostly spent on a tree. It has small body around 10-15 cm, measured just from head and body. But the rear foot of it, is very long, which is twice of its body length. This foot helps Tarsius Tumpara in catching its prey. The finger expands in the tip side with unique inner skin. Tarsius Tumpara can stick to any slippery surfaces, and it has a long tail around 20 cm. Their big eyes help them to see at night, and the head can be rotated 180° like an owl.

Tarsius Tumpara is an insectivore animal which is animal that consume insect as its food. Besides, Tarsius Tumpara also prey small vertebrate like small bird, lizard, snake, and bat. Tarsius Tumpara catches its prey by jumping. In this case, the foot is played maximally. For some animals like insect, bird, and bat, Tarsius Tumpara can catch those by vertical strength. It can even catch a flying bird. The jump of an adult tarsius can reach to 3 m high, and they move from a tree to another by jumping too.

Tarsius Tumpara nest in trees in group, in the tree hole Tarsius Tumpara spend more time on tree even to sleep and eat. This animal is also a nocturnal animal, which is an animal that active in the night. While in daylight, they usually sleep.

Tarsius Tumpara is a mammal, which breastfeeding its kid. The pregnancy is about 6 month and the unique thing is, the baby tarsius is born with (already) open eye and hair on their body. One day after it’s born, the young tarsius is able to climb tree and jump. What a jumper !