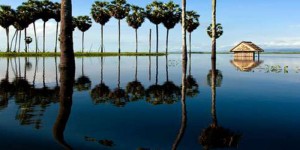 Tempe Lake is a name of the second biggest lake in Sulawesi Island. There’s no information yet about the origin name ‘tempe’ for this lake and it has nothing to do with name of one of traditional foods in Indonesia. With wide around 13,000 hectares, Tempe Lake becomes the 8th of 10 biggest lakes in Indonesia. Tempe Lake is located in South Sulawesi, and surrounded by three districts: Sidrap, Wajo and Soppeng. The lake which becomes one of travel site in South Sulawesi is included into Ancient Tectonic Lake.

Tempe Lake in ancient time was a watery area that became a connector amongst Makasar straight, Bone, and Pare-pare Bay. In other words, Tempe Lake was a watery area which separated Sulawesi Island in the north and south side. This water area was formed in the end of Ice Age (approximately 20,000-10,000 BC) where the ice lands were melting and the sea water were begun to increase. This watery area called as Ancient Tempe Lake.

After passing thousand years of process, Tempe Lake becomes a fresh water lake. Due to it exist in uniquely Sulawesi; Tempe Lake has its own uniqueness. It’s surrounded by lines of mountain, which make the scenery is incredible.

With 23 rivers which flow and end in this lake, has made Tempe Lake has abundant fresh water fish richness.  It’s been a long time Tempe lake becomes the biggest supplier of fresh water fish in Indonesia. The area has many source of food for fishes, and it’s an ideal ecosystem for fish water breeding. For you who like to fishing, this is a perfect place for you.

The biological richness of Tempe Lake has become a main occupation for local people. The local people are not merely live surround the lake but they also built houses in the middle of the lake. Some groups of traditional houses of Bugis tribe with colorful flag were built by its people on Tempe Lake.  This place can be used as shade place when the sun is too hot, while you can enjoy the local’s hospitality.

Beside fresh water fish to consume, Tempe Lake is also rich for decorative fresh water fish. With the forming process of Tempe lake explained before, has made Tempe lake owns some fresh water endemic species. Some of the fishes become an export commodity to Europe and Amerika, such as Celebes Rainbow fish (Telmatherina ladigesi) and Binishi fish (Oryzias celebensis).

In Tempe Lake, you can go around it using a boat. You will see a lovely panorama and various water flower, and also some poultry which step by in it. As info, Tempe Lake is located in migration route across continent fro some birds. Those birds migrate from one continent to another, and Tempe Lake becomes their place to stop over. Some of those birds are endangered species which protected by world bird conservation. So, if you lucky you will meet some type of birds which rarely to be seen. Forest around Tempe Lake is also an ideal habitat for some types of birds, such as “Belibis”.

Beside the magnificent biological richness of  Tempe Lake, here you can see the unique culture of local people.

Around august, local people hold a sequence of traditional ceremonies which aimed to purify the lake. Those occasions began by the slaughtering of cow that led by the Fisherman Chief. After that, you can see some sequences of occasions as below:

To enjoy the uniqueness of Tempe Lake, you can start from Tempe sub district, in Wajo district, South Sulawesi.