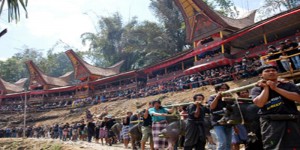 By this Rambu Solo funeral ceremony, you can see that Tana Torajan people respect their ancestor very well.  The funeral procession consist of several show list, where in each of the show, you will able to see the cultural values that still highly maintained by people of Tana Toraja.

The funeral Procession / rante consist of sequenced shows. It is held in an open space located in the middle of Tongkonan Traditional House complex. Those shows are:

The second procession is the Art Show. This process held not only to celebrate but also a form of respect and pray for the dead. In this procession, you can watch:

In Tana Toraja custom, they believe that after the death there is a ‘world’. This ‘world’ is a place of eternity where the spirit of ancestors gather and rest. Torajan people called it Puya, which located in the south side of Tana Toraja. In this Puya, the spirit of the dead will transform into wandering spirit (Bombo), a spirit the same level as god (To Mebali Puang) or protecter spirit (Deata). Torajan people believed that the transformation form depends on the perfection of Rambu Solo ceremony. Hence, Rambu Solo itself is also a death perfection ceremony.

Rambu solo is a must for the left family members. Because, only by Rambu Solo, the dead spirit will reach perfection in Puya. So, the left family members will try maximally to hold Rambu Solo ceremony. But the cost to hold this is not cheap. That’s why, this traditional funeral ceremony of Tana Toraja is often held months or even years after the death occurred.

Not Dead, but Ill

Torajan people believe that Rambu Solo will perfect someone’s death. Hence, they consider that for those who die but haven’t got any Rambu Solo ceremony, they will not consider as died people. They will be treated like people who’s ill or in weak condition.

The dead people who still consider being alive, will also be treated same as the any other live family members. They’re laid in bed before sleeping, they’re prepared some food and drink, they’re asked to talk and joke, like they used to do when they’re still alive. This thing is done by all family members even by surround neighbor to the dead people.

To be continue Rambu Solo Ceremony, the Most Expensive Funeral.