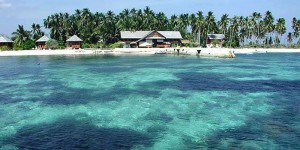 Wakatobi has 4 big islands: Kaledupa, Wangi-wangi, South East Sulawesi, and Binongko, which located in Wakatobi district itself. Wakatobi National Park has more or less 1,390,000 hectares area, and it has a very complete undersea richness, such as various coral reef and sea creatures. That’s why, Wakatobi National Park serves a magnificent under sea panorama and perfectly suitable as diving location.

If you’re travelling in Sulawesi Island, don’t miss to visit Wakatobi. The beauty of the undersea panorama with cluster of coral reef has become the main attraction of Wakatobi. There are approximately 112 kinds of coral reefs from 13 families which spread out in 25 spots. Some of them are A. hyacinthus, Acropora formosa, Psammocora profundasafla, Leptoseris yabei, Pavona cactus, Fungia molucensis, Merulina ampliata, Lobophyllia robusta, Platygyra versifora, Tubastraea frondes, Euphyllia glabrescens, Stylophora pistillata, Sinularia spp and Sarcophyton throchelliophorum. In addition, there are also beautiful under sea caves located along the coral.

Beside fish and sea turtle species, some sea bird also add the beauty of the national park which are malay cerek (Charadrius peronii) and brown stone goose (Sula leucogaster plotus). tourist can do many activities in wakatobi, like swimming, snorkeling, photo hunting and many more.

The gate to Wakatobi National Park is in Wanci village, Wakatobi district, south east Sulawesi, though Wakatobi itself is a part of 4 islands.

To get into Wakatobi, tourist needs to take 3 steps. First one is started from Kendari to Bau-bau with air/ sea transport. If you’re using air transport, it will take 1 hour, and it will take more than 4 hours by sea.

After reaching Bau-bau, the trip continued by car to Lasalimu for about 2 hours.

After you got in Lasalimu, the next trip is to Wanci which is the gate of Wakatobi National Park. This trip can only be done by ship approximately in 1 hour.

In this area, facility and accommodation are already available. There are some home stays and hotels you can use to stay overnight, such as Wakatobi Patuno Resort. Restaurant or local eatery with sea food menu can be easily found here. If you want to dive, there are also some diving equipment rentals.