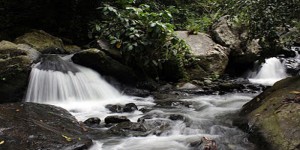 Located in Donggala district, Central Sulawesi, Wera Tour Park is a protected forest which is made into natural forest conservation. The existence has been published by local government in 1980 as tourism park. Up till now, Wera Tour Park has been largely visited by local, or foreign tourists because of its beauty.

Some of unique animals can be found here such as Tarsius tumpara, cassowary bird, blue-headed parrot, yellow-crested cockatoo,black monkey, forest chicken, and some kinds of butterflies. But those animals population has been decreasing a lot. Some areas of Wera Tour Park are indeed areas which still virgin and untouched, but most of them are already have.

So does with the plant population. You might will see some types of orchids and nest fern, but the population is not so many. Other plants like Canary tree, Lei, Lebanu, Banyan tree, and Bintangur are also live in this protected forest.

In the middle of Wera Tour Park, there’s a river flowing in the middle of the park, which is called Wera river. Wera river is not so big, and not so deep because it flows amongst very steep rocks. Up till now, the flow of Wera river is still natural, because in the hill specially in top area, there are still thick jungle in it. The water flows all the time.

In a part of Wera river, it flow passing hills gap and forming a waterfall. This is one of the best views at Wera Tour Park, which is Wera waterfall.

Like any other waterfalls in Sulawesi, Wera waterfall has several layers. The main waterfall is flowing out from rocks between hills with highness around 100 m. below the waterfall there are few layers of waterfall, but they’re not so high. After down into flatter area, the Wera river’s flow is heading to Kaleke village and some villages around it.

Wera Tour Park is included tropical rain forest. Beside various plants, the park also has many thick and dense trees, which will give you fresh and cool air. The land contour is hilly which will serves you awesome green scenery.

For you who like to adventure, the perfect place to enjoy the shady view is on top of Wera waterfall. You can reach it by walking in the path in the middle of the forest. It’s suggested you to wear suitable footwear such as tracking shoes. The path will be inclining, because the forest areas are hilly. Once you get in top of the waterfall, you will find a remarkable panorama. The waterfall below you is flowing intruding in the dense of the green trees.

If you want to spend the night with camping, you can do it in a land in the north and top of the hill near Ngatapapu village. In the middle of your trip to go there, you can stop by in the edge of Wera river to enjoy the cool and the freshness of Wera river flowing.

Balumpewa village is 19 km south side of Palu city. You can reach it by personal/public transportation. The duration of the trip is around 45 minutes-1 hour. From Balumpewa village you can get into Wera waterfall by walking through the protected forest for 2 km.

Some facilities and accommodation cannot be found so many in this tour object. But if you want to stay the night hotel near the Wera Tour Park, there some recommended hotels such as Santika Palu Hotel and Palu City Hotel.